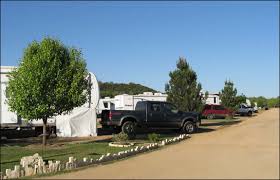 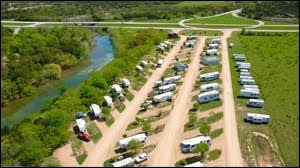 After a long summer with many stories of travel and fun, River City Travelers members gathered for the annual October rally.  This year’s location was Miller Creek RV Park in Johnson City, Texas.  Eleven coaches/RV’s were in attendance with a total of 21 people.

On Wednesday night early arrivals gathered at the Pecan Street Brewing Company for companionship and food.

had little work to do because of their assistants:  Hans and Linda Liebe; David and Helen Whitmire; Pat Watts; Hank Atkinson and Barbara Reeves; and Brad and Rose Mudgett.  All worked hard to prepare wonderful meals in the well-equipped kitchen in the rally hall.

Thursday night was a baked potato bar with all the fixings, salad, with lime and orange sherbet for dessert.   Dinner was followed by an energetic game of Left Center Right Wild.

Ruth Lickvar was the lucky winner on the first game, with

Gail Wight winning the second.  Things got so tense that

Friday morning began with the team preparing Texas-shaped Belgian waffles, fresh fruit made and served by Pat, Helen and Linda.  Breakfast sausage cooked by Hans and served by Hank.

The rally room was lavishly adorned as a red-neck trailer park, complete with a child’s blow up pool filled with beer and wine coolers; and pink flamingo cozies on the tables available for cold drinks.

While appetizers were being served, participants started arriving dressed for the roles they were assigned.  Dan, a short order cook who worked at a truck stop, was wearing most of the food he served.  Gail, who also worked at the truck stop, but not as a cook, came dressed to kill!  Hunter Spring (Hans), gun enthusiast, was well equipped for his role.  Wyatt Bradley (Brad) grew a lot of hair while he was incarcerated.  Others dressed for their parts as well.  Just before dinner, the lights went out and a gun shot was heard.  When the lights came back on, Sally Ann (Linda Liebe) was dead on the floor.  As dinner was served, a lot of chatter was going on, with everyone declaring their innocence and making vicious accusations against others.  Even though it looked like Sue Ann (Sue Gruchacz)

was the actual murderer and most participants voted for her, Ginny Barley (Rose Mudgett)

actually was the guilty party.  Awards were given for best acting, best dressed and the participant with the most cash.  Yes, there was bribery going on!

Saturday morning started with an all-American breakfast of scrambled eggs, hash brown casserole, bacon, biscuits with sausage and gravy, and fruit salad.  After breakfast, Hank Atkinson announced that this would be the last River City Travelers’ Rally for himself and Barbara.

with a framed picture of Hank and Barbara’s final rally of October 2019, as well as flowers and a bottle of wine.  Things lightened up as everyone started telling their “Hank” stories.  With parting tears and hugs, the evening ended, as well as the rally.