Severe, threatening weather kept many early bird arrivals away but several still braved the threatening conditions and four RV’s arrived Wednesday (Coys, Dieterichs, Pounds, and Atkinson/Reeves). The storms came through quickly that afternoon with heavy rain, strong winds and small hail. The skies cleared by early evening though, just in time for the early arrivals and the Broughtons (who drove in from their residence in nearby Burnet) to gather for a quick happy hour in the Dieterich’s coach. Afterwards, all went to enjoy a nice dinner and some drinks at River City Grill on Lake Marble Falls. 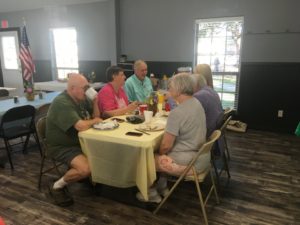 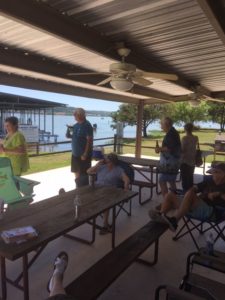 It was a beautiful morning overlooking Lake LBJ and watching from the covered patio the various fishermen rushing here and there in their fishing boats to find the perfect spot. 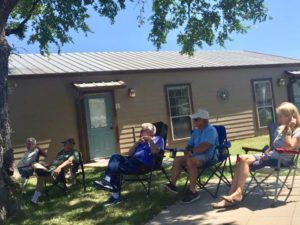 More of the rally attendees began showing up late Thursday morning and into the early afternoon. Rick Coy grilled sausages early afternoon for all to enjoy sausage wraps. There was a total of 11 RVs attending the rally and the Broughtons driving in from Burnet.

Thursday evening brought all together for the happy hour consumption of drinks and appetizers and a Mexican themed dinner afterwards which included oven baked tacos, drunken beans, queso and chips, and sherbet. After dinner the group was introduced to the “Heads or Tails” game. In this game instead of “grabbing your partner” you grab either your head or your tail and wait for the coin toss. David Lease was the correct guesser of the final coin toss and winner.

Another gorgeous morning to start the day! Happy hour went into full swing with a Pajama Party theme. Some very interesting pj’s showed up, such as Aggies and Longhorns, and even flamingo house shoes! After some mingling the wagon masters and assistant wagon masters went to work and treated all to scrambled eggs, biscuits with sausage gravy, fruit and pastries.

After breakfast some headed to their RV’s to relax and enjoy the outdoor weather while others explored the town to do some shopping. 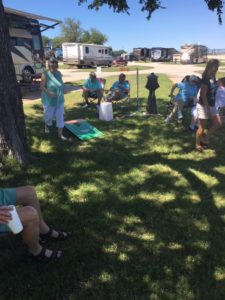 Early afternoon began the Cornhole Toss competition, ending with Donnie Pounds, Phil Dieterich, Audrey Lease and Vickie Pounds being the contenders for the final game to be played on Saturday. 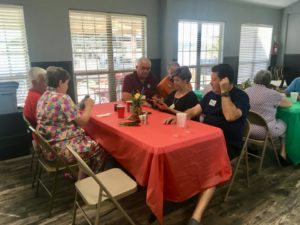 Five o’clock came around and our happy hour began. After some visiting and munching all sat down to enjoy a traditional dinner of chicken fried steak, mashed potatoes with gravy, and salad. All were treated to very special desserts of Key Lime Cheesecake and Chocolate Cheesecake personally made by Margaret Walsh. What superb desserts and they were picture perfect – thank you Margaret! Several advised Margaret she missed her calling! 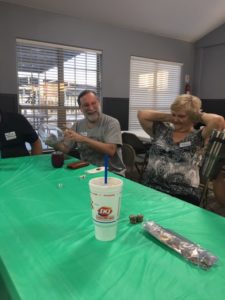 After dinner some attendees returned to their RV’s to enjoy the wonderful weather outside while many stayed in the rally hall to play several games of LCR (Left, Center, Right dice game). The big winners were John Lyon, Linda Liebe and Sandy Randolph. There was also a chair number drawing and Daryl Waldrop was sitting in the selected chair and declared the winner.

The morning started off again to be a beautiful day. The usual morning happy hour attracted several early risers. The members participated in breakfast by customizing their own Ziploc Omelet. Fruit and pastries were also served. Who would ever believe you could make an omelet in a freezer storage bag in boiling water! After breakfast those attending the rally that had a birthday during the month of April were acknowledged, including Janet Broughton, Ruth Lickvar, Linda Liebe and Hans Liebe. 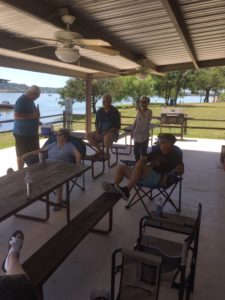 After the meeting some moved to the covered patio to enjoy the serenity of the lake and the gorgeous day. Others went shopping, sightseeing, etc. The final competition of the Cornhole Toss never came together that afternoon as all were doing their “own thing” enjoying the day.

Time came for the final Happy Hour of the rally. 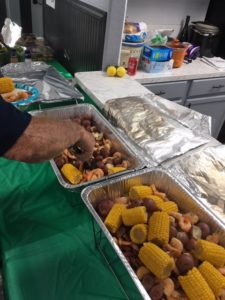 After munchies all were treated to “Frogmore Stew,” alias seafood boil, consisting of shrimp, sausage, corn on the cob and new potatoes, accompanied by garlic bread, salad and peach cobbler. After dinner all participated in a short game of questions of “Never Have I Ever.” There were quite a few revelations and surprises! Winners were Margie Waldrop and Barbara Reeves. A second chair number drawing was held and Linda Liebe was the lucky person this time.

The Wagon Masters, Sandy Randolph and Rick Coy, want to give special thanks to the volunteer Assistant Wagon Masters Hank Atkinson and Barbara Reeves, Hans and Linda Liebe, John and Ruth Lickvar, and David and Audrey Lease. But we also want to thank the other rally attendees who helped out throughout the rally. The friendship and comradery is what makes it all come together and work. THANK YOU!

See you at the next rally!
Sandy Randolph & Rick Coy